Are Sheffield war memorial trees being felled to save on maintenance costs?

How can Sheffield heal divisions over the tree-felling controversy? 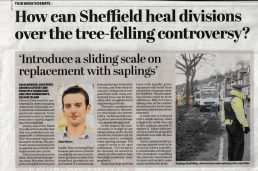 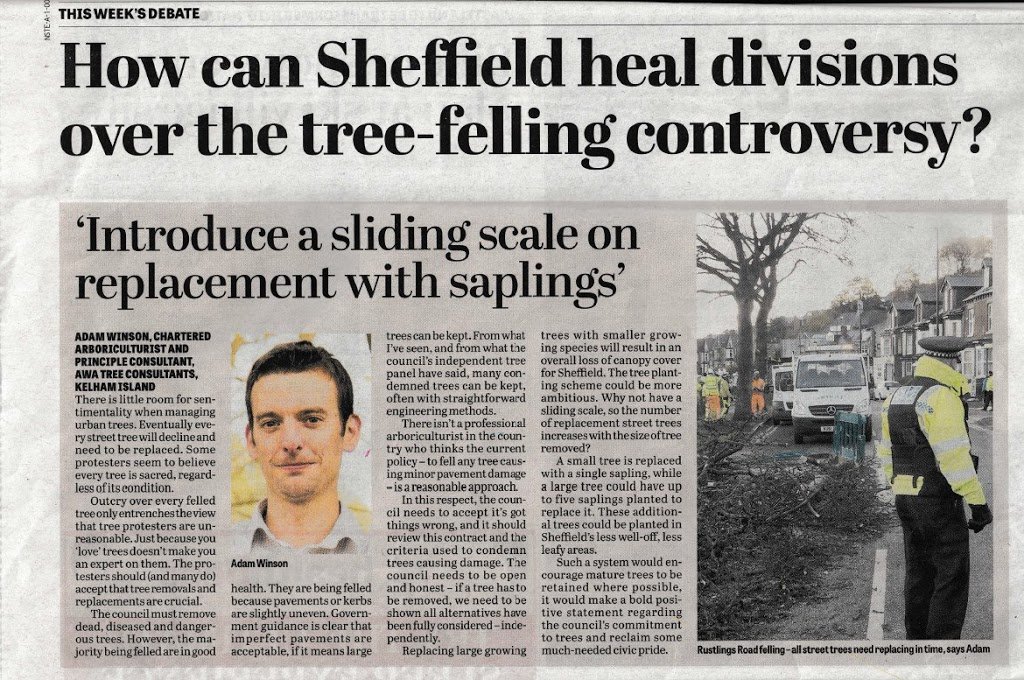 Article on the sheffield division over the tree-felling controversy.

The Sheffield Telegraph runs a debate feature every week called Telegraph Voices. A journalist contacted me last week, to take part in a debate entitled: ‘How can Sheffield heal divisions over the tree-felling controversy?’ As ever, it’s tricky to cover such an emotive and complex issue – and to suggest pragmatic solutions – in just 300 words.

“There is little room for sentimentality when managing urban trees. Eventually every street tree will decline and need to be replaced. Some protesters seem to believe every tree is sacred, regardless of its condition. Outcry over every felled tree only entrenches the view that tree protesters are unreasonable. Just because you “love” trees doesn’t make you an expert on them. The protesters should (and many do) accept that tree removals and replacements are crucial to manage our city’s trees.
The Council must remove dead, diseased and dangerous trees. However, the majority currently being felled are in good health. They are being felled because pavements or kerbs are slightly uneven. Government guidance is clear that imperfect pavements are acceptable, if it means large trees can be kept. From what I’ve seen, and from what the Council’s independent tree panel have said, many condemned trees can be kept, often with straight-forward engineering methods.
There isn’t a professional arboriculturist in the country who thinks the current policy – to fell any tree causing minor pavement damage – is a reasonable approach. In this respect, the Council need to accept that it’s got things wrong, and it should review this contract and the criteria used to condemn trees causing pavement damage. The Council need to be open and honest – if a tree has to be removed, we need to be shown that all alternatives have been fully considered – independently.
Replacing large growing trees with smaller growing species will result in an overall loss of canopy cover for Sheffield. The tree planting scheme could be more ambitious. Why not have a sliding scale, so the number of replacement street trees increases with size of tree removed? A small tree is replaced with a single sapling, while a large tree could have up to five saplings planted to replace it. These additional trees could be planted in Sheffield’s less well-off, less leafy areas. Such a system would encourage existing mature trees to be retained where possible, it would make a bold positive statement regarding the Council’s commitment to trees and reclaim some much-needed civic pride.”
Adam Winson. Chartered Arboriculturist and Principle Consultant: AWA Tree Consultants. Kelham Island, Sheffield.